Using LIDAR data in the quantitative expertise of the phenomenon of erosion after an intense event: the example of the Baillmarsane watershed (Escaro, Pyrénées-Orientales - France) following the Mediterranean episode GLORIA

Since the end of the twentieth century and the acquisition by the French State, several strategies aiming at decreasing the frequency and intensity of numerous phenomena (torrential flooding, erosion and gullying, landslides) have been carried out on the Baillmarsane watershed (Escaro, Pyrénées-Orientales - France). The objectives are several: to slow down the torrential dynamics and the incision of the longitudinal profile, to drain the surface waters, to fight against the erosion of the slopes.

The use and comparison of LIDAR data allows the quantification of erosion phenomena. This quantitative information is all the more interesting to put into perspective following an intense rainfall event.

The production of solid materials and the protection of soils against erosion is all the more questioned in the face of major meteorological events. These questions were raised during the Mediterranean episode GLORIA. This rainy-snowy episode, which was active between January 20 and 23, 2020, followed the overflow of the GLORIA storm to the South of France, which impacted the West of the Mediterranean basin. The equivalent of 4 to 5 months of rain fell in 72 hours. These high accumulations generated exceptional floods in the department. 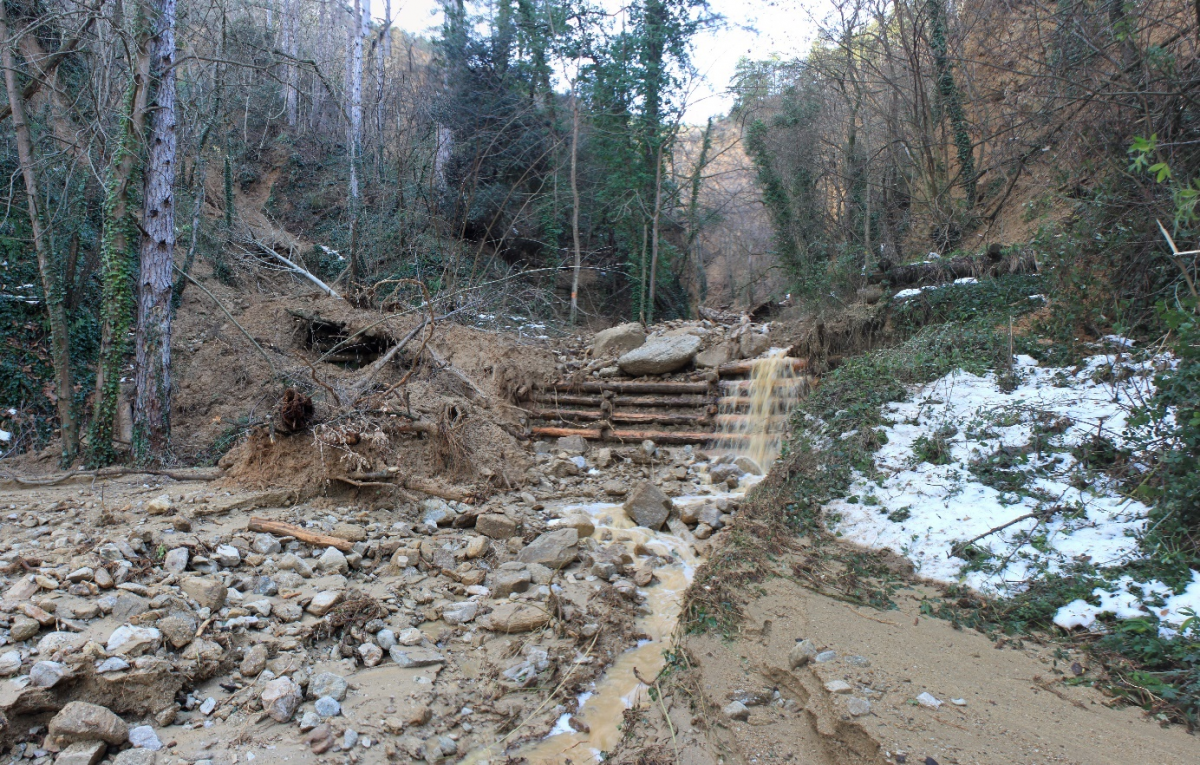 The use of LIDAR data makes it possible to estimate the quantification and spatial analysis of the erosion phenomenon. Through a series of treatments, it will be possible to identify erosion and accretion areas as well as volume ranges allowing direct links between these areas.

Two LIDAR campaigns were carried out by the same provider: one in 2018 and the other in 2021 following the Mediterranean episode.

First, visual comparisons could be made from orthophotographs and shadows made on both dates. The before and after pictures show areas of bank top recession or a landslide niche. The quantification of the soil erosion phenomenon and the accumulation of materials constitutes a second axis of work. It is possible to process data at several scales, from the watershed to a very targeted area of a few m², in order to quantify the volumes of erosion and accretion. This type of processing is all the more interesting when the land is prone to erosion following intense rainfall events. Comparisons of longitudinal and cross-sectional profiles at various time steps will allow to highlight, in a very localized way, the sectors of bank recession or even the heightening of a torrent bed. 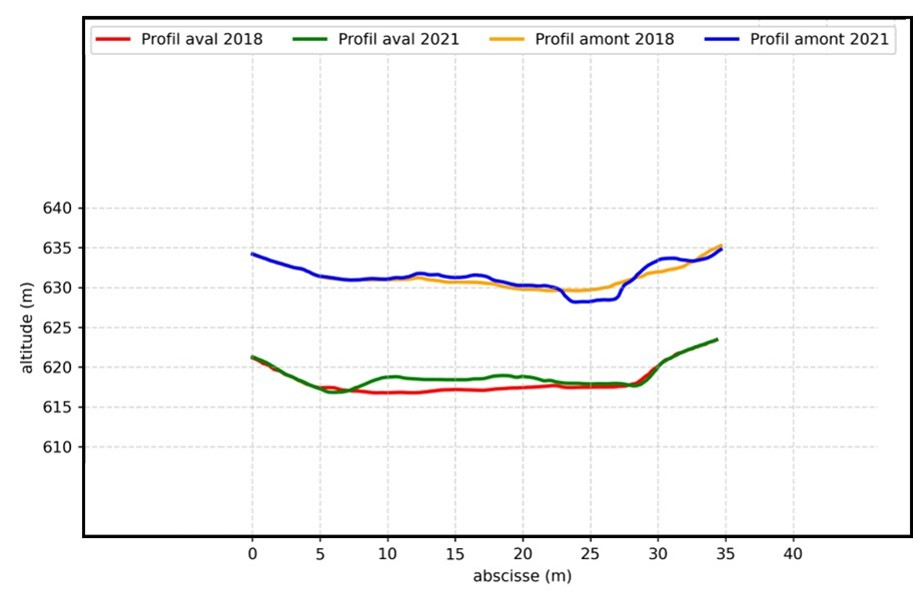 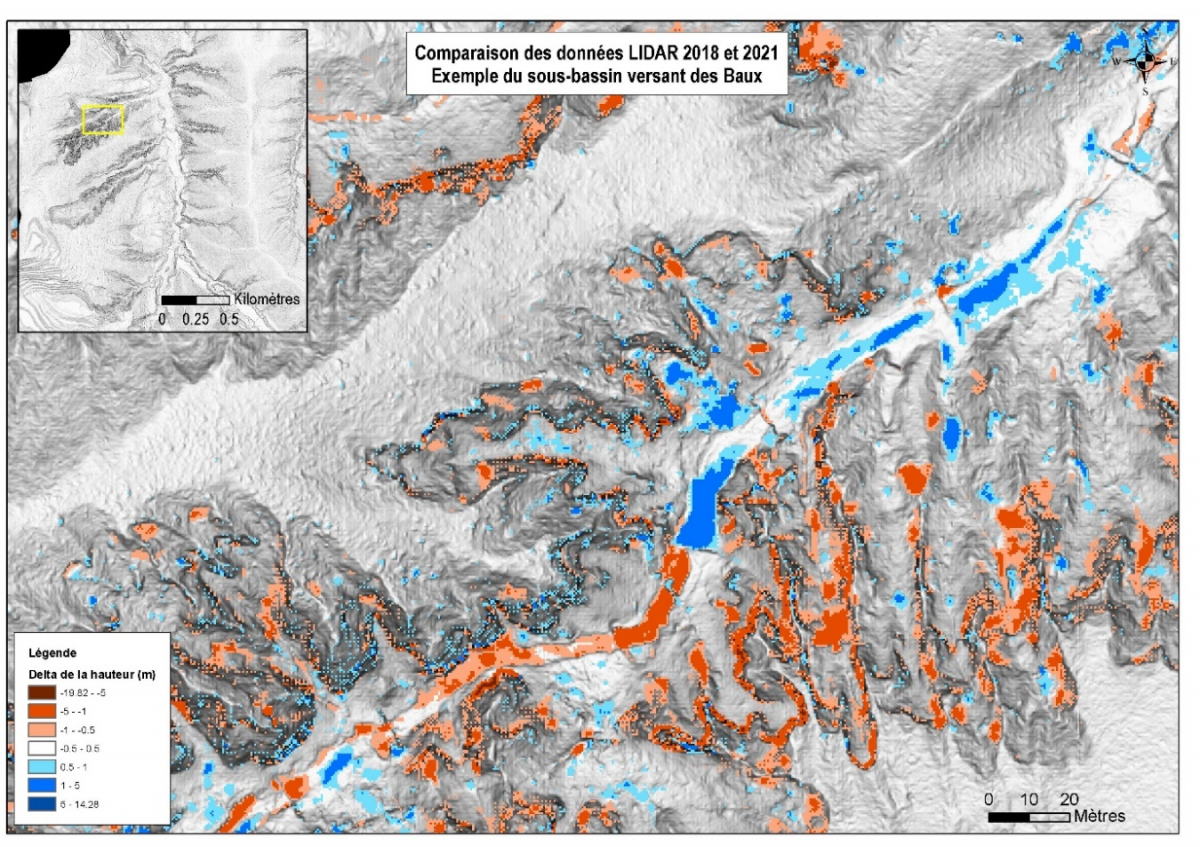