One of the pilot trials of the SUDOE MONTCLIMA project, led by CREAF, proposes to apply adaptive forest management to reduce the forest's vulnerability to fire risk

One of these pilot trials, led by CREAF, is being carried out in a Mediterranean oak forest in the Montnegre-Corredor Natural Park (Barcelona, ​​Catalonia) with the aim of reducing the vulnerability of the forest to the fire risk. The pilot trial consists of applying adaptive forest management in a Strategic Management Point (PEG) for the control of large forest fires. The PEGs are locations in the territory where the modification of the fuel and / or the preparation of infrastructures allow the extinguishing service to carry out safe attack manoeuvres that reduce the progress of a large forest fire. In this sense, they represent spaces that, due to their spatially strategic location, have a key role as protective effect on a relevant surface of the Natural Park. 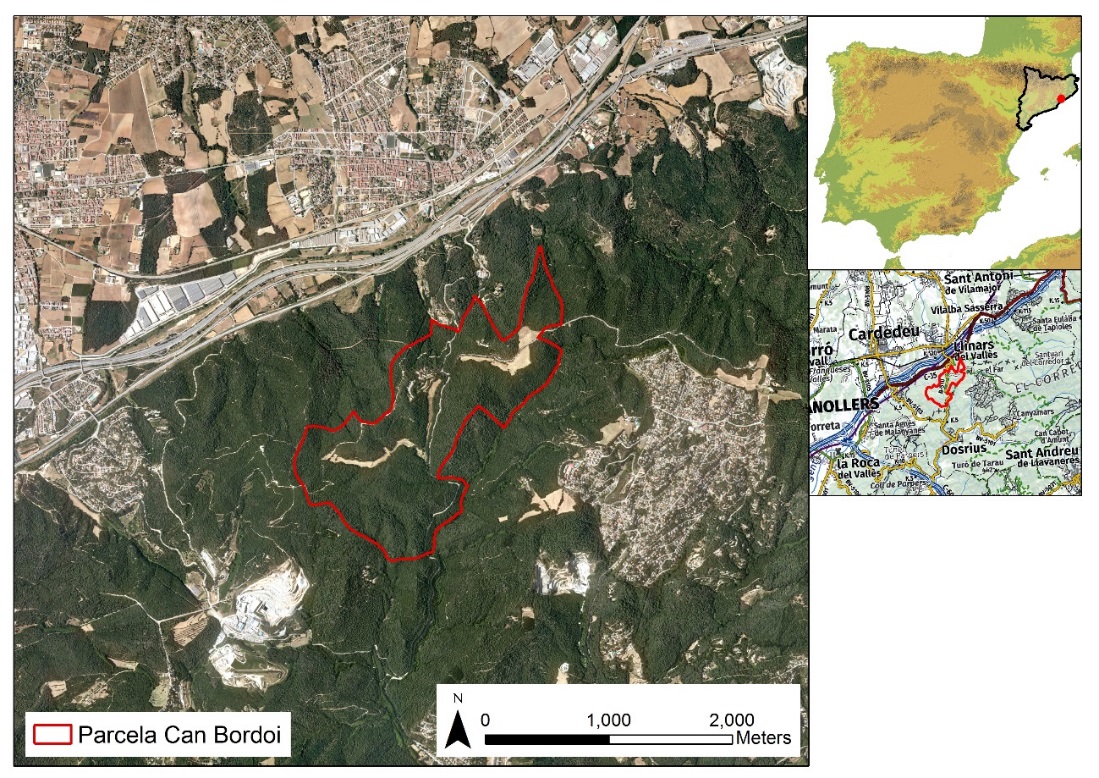 The pilot trial is being carried out at the Can Bordoi estate, in the municipality of Llinars del Vallès (Barcelona), which covers an area of ​​214 ha. Within this estate, the trial is performed in the extreme southwest, since in the case of a large forest fire that comes from the west and which would be the most likely in the area, it could lower the intensity of the fire, facilitating the tasks of extinguishing firefighters and preventing the entire massif from burning. Moreover, the applied management helps to strengthen the forest mass to the risk of drought affectation.

Prior to the application of adaptive forest management, a series of forest inventories have been accomplished between January and February 2020. These inventories allow characterizing the forest mass before the management and calculating the weight of the intervention (volume and basimetric area extracted, changes in fuel continuity ...). To do this, monitoring plots are installed in the different managed areas and a series of variables are measured over time. 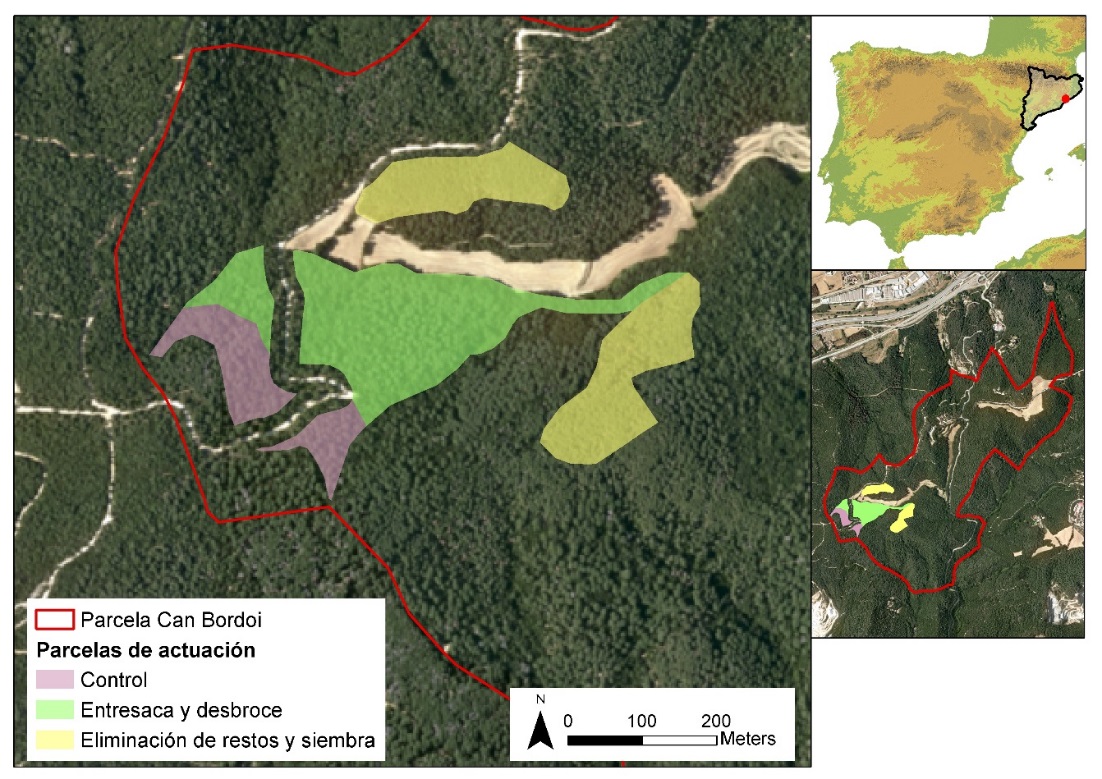 The pilot trial has consisted of the application of adaptive forest management (selective felling, where the largest holm oaks are left, and scrubland clearing) on ​​a 5.4-hectare plot and of creating open woodlands (elimination of stone pines affected by Tomicus and pasture recovery) on a 4.7 ha plot to create an open area that helps improve the fire resistance of the massif. In addition, a control plot of 1.9 ha has been left where no action will be taken and which will serve to compare with the managed area. The action has been carried out between February and March 2020 by the Montnegre-Corredor Forest Owners Association.

At the present time and due to the coronavirus crisis, it has not been possible to continue with the tasks scheduled in this pilot trial, which will be restart as soon as the alert state is over and the location can be visited again. The works that have been pending are: 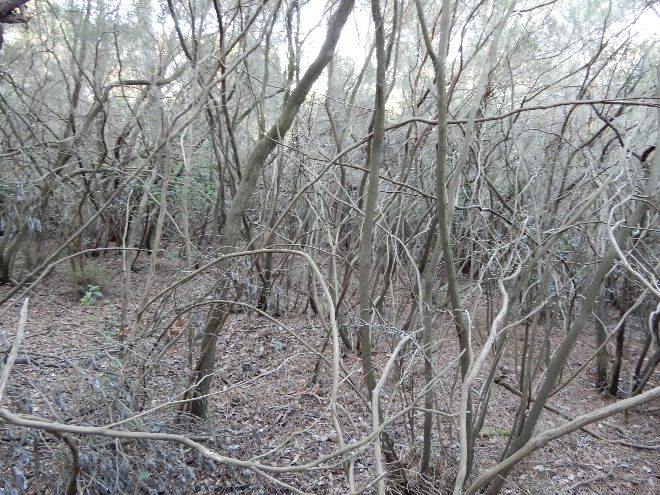 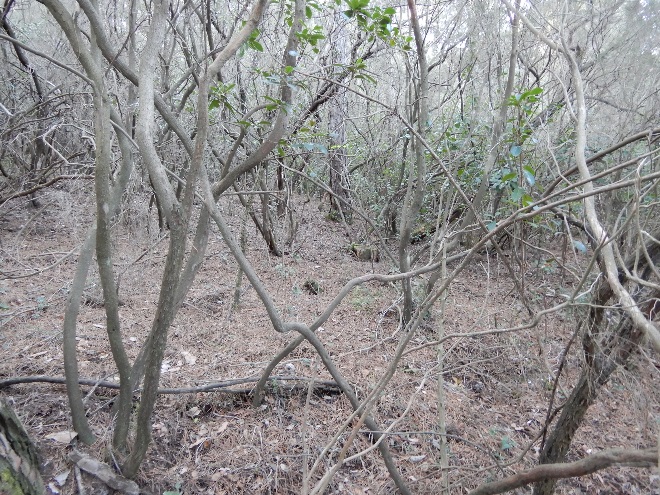 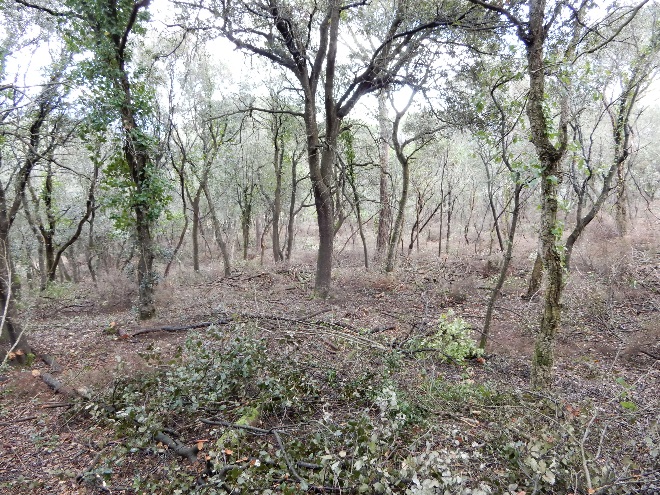 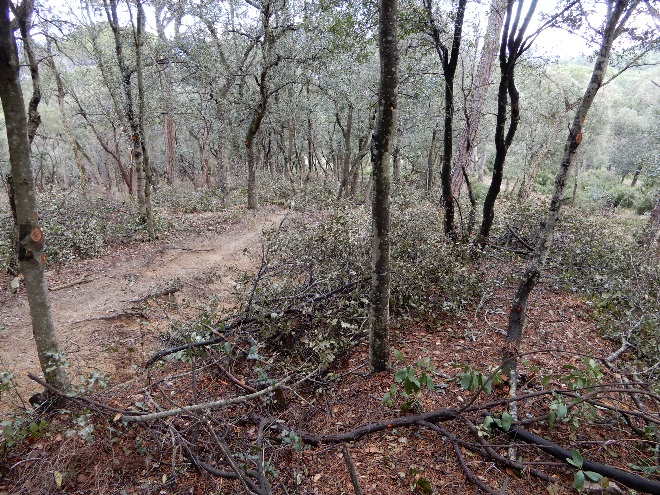