The MONTCLIMA pilot cases in Andorra.

Two of these pilot trials, led by FORESPIR and the ANDORRA Research + Innovation, is being carried out in the Principality of Andorran (Pyrenees). The Andorran territory is a mountainous territory (the average altitude of the principality is 2048m) with large and steep slopes where the natural risks are multiple. In Andorra, forests occupy more than 40% of the territory and play an important role in the prevention of risks such as block falls, snow avalanches, torrential lavas... So the development of mitigation strategies is very important and it can be carried out through the study and analysis of natural disasters, but also through the evaluation of impacts. In Andorra, as in many mountain territories, mitigation strategies go through a multi-risk approach to actions since, for example, a protective forest against falling blocks is also subject to a fire risk. For these reasons, it is important to consider both the protective function and the vulnerability of forests to prevent a risk mitigation action from being more favourable to the occurrence of other risks.

The first pilot trials carried out in Andorra focus on the falling blocks risk, but also considering the risk of fire because with climate change the frequency and severity of the cliffs will increase. More specifically, the action plans to act in a protective forest against falling blocks located in the parish of Andorra la Vella in the area of ​​La Comella, very close to important urban areas. In this protective forest against falling blocks, located near a recreation area and then where the probability of starting a forest fire is higher, it is intended to reduce the risk of forest fire, and in case of occur, reduce its intensity, and allow the forest to retain its protective role 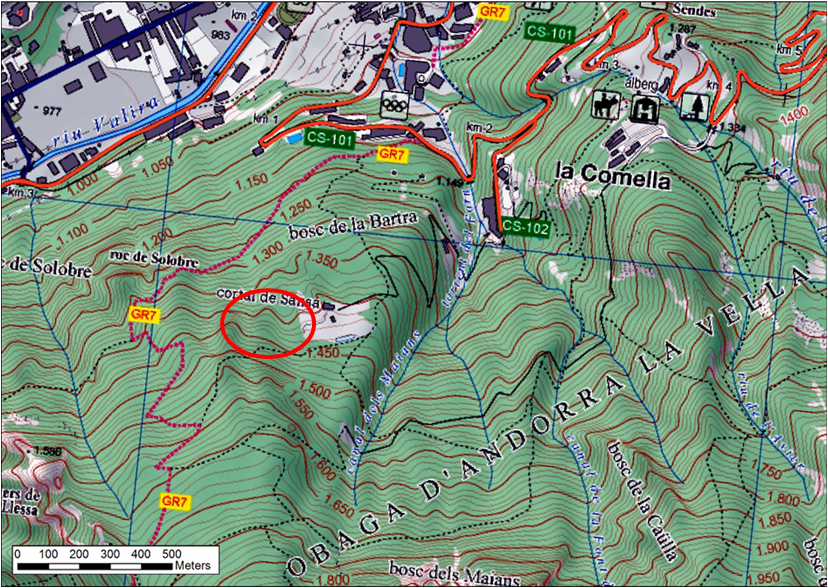 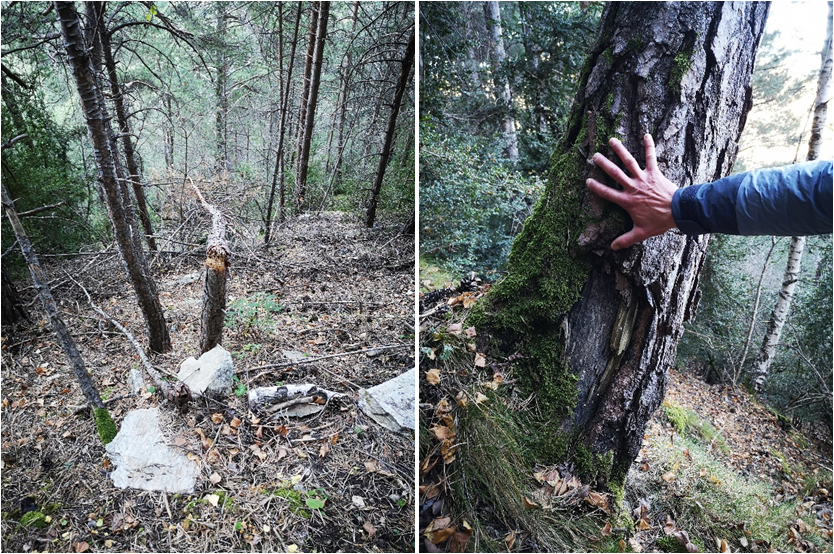 Blocks and signs of impact of blocks in the trees of the La Comella forest.

The second pilot trials carried out in Andorra focus on risk of floods and torrential laves, in the Madriu-Perrafita-Claror valley, in the Calm de Claror area where large extensions of forests and grassland vegetation are scarce. In this area predominate the tarteras and rocky areas with some patches of scarce vegetation (like in many other higher areas of the territory). Small stone pots, despite having some substrate soil and some plant species, are usually quite mobile and erodible and the consequences can be significant and affect populations in direct or indirect ways. This is what happened on July 21, 2015 when a large stationary convection storm in the Calm de Claror area that accumulated 71 L/m2 in one hour and up to 96 L/m2 during the 24 hours associated with the episode. Because of this great intensity of precipitation, there was surface runoff on steep slopes and scarce vegetation, which gave rise to intense erosive phenomena at the headwaters of several mountain rivers. In the Claror river basin torrential lavas that were deposited at the foot of the slope, but due to the deposit of sediments, the Claror river recovered its erosive potential downstream. All this caused a strong cloudiness of the river and made the waters of the Escaldes-Engordany parish, captured further down in the same basin, not suitable for human consumption. New rains of much less intensity that took place during the summer generated new erosive episodes and caused new cuts in the water supply. Then it was necessary to consolidate the accumulated sediments in the area and to stop the erosive process at the headwaters of the Claror River, with the aim of reducing the magnitude and frequency of subsequent erosive episodes. 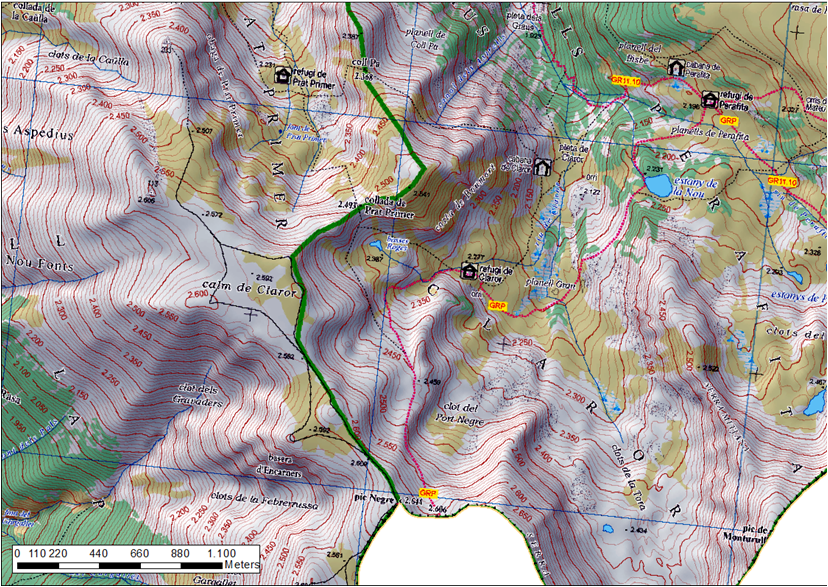 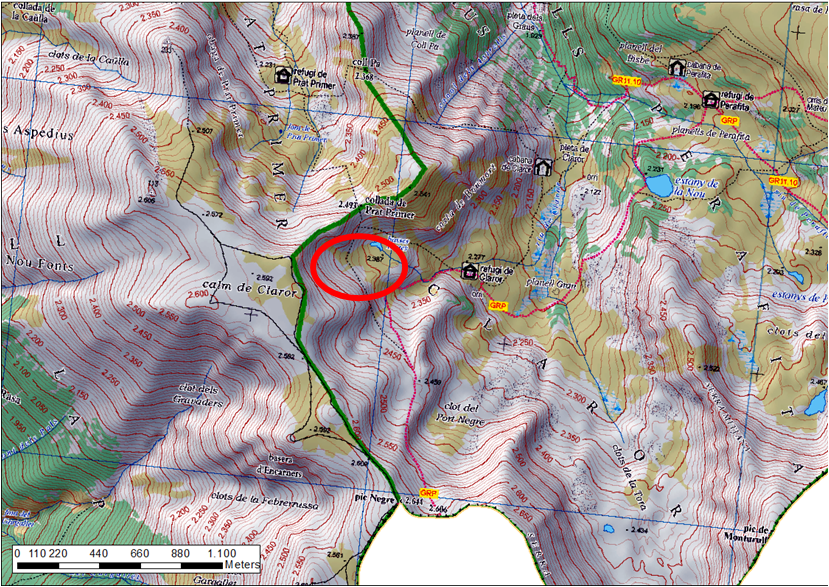 Location of the Calm de Claror pilot trials, in the Madriu-Perrafita-Claror valley, Principality of Andorra.

Because the area is within a cultural landscape of World Heritage according to UNESCO, anthropic interventions must be minimal, and always respecting the natural environment, the landscape, and without harming natural resources. Between 2015 and 2017, restoration actions were carried out to stabilize the sediments and prevent new movements of solid materials. The objective was achieved, but now after a few years it would be necessary to complete the work carried out to perpetuate the actions and this is what is intended to be done within the framework of the project. More specifically, the action plans to focus on the revegetation task carried out especially in 2016 and carry out a fertilization and complete the revegetation with new plantings in some specific points. 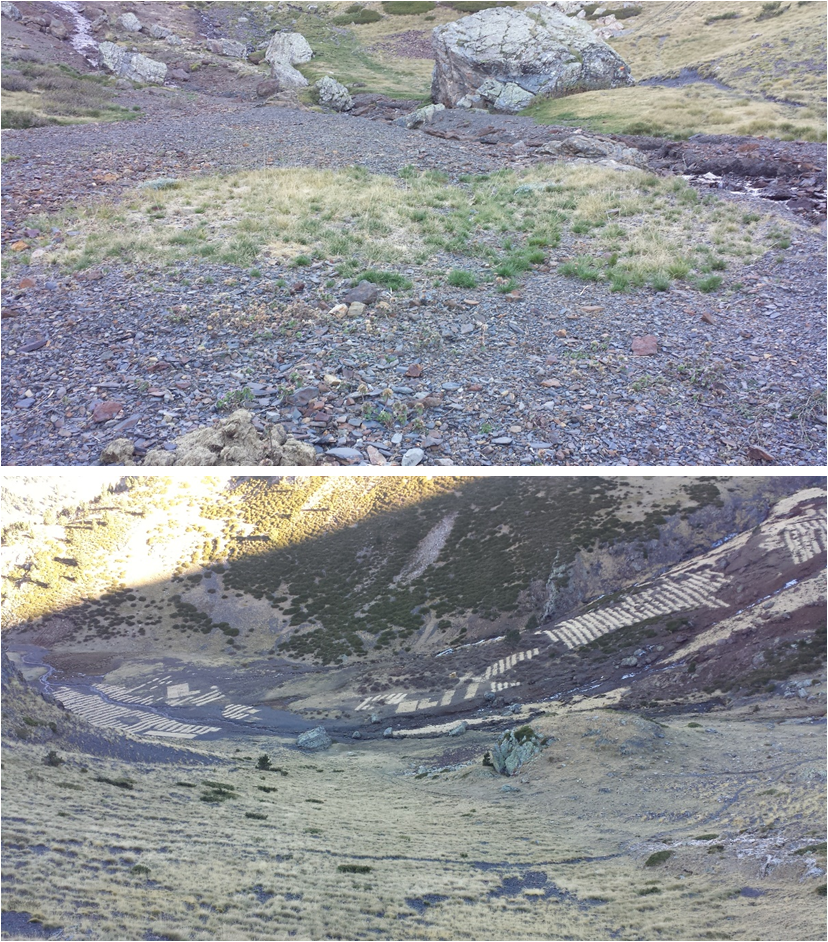