In Europe like in Africa and Asia, droughts have been a recurrent topic in recent years, having real tangible impacts on our daily lives.

Although droughts occur naturally as part of the water cycle in all climatic zones, yet it is reported that climate change is accelerating their severity and occurrences with significant impacts at the global scale. Scientists stated an increase in the risks of droughts due to decline in precipitation and rising temperatures.

The European Commission’s Joint Research Centre developed the European and Global Drought Observatories (EDO and GDO) to monitor and provide indicators associated with droughts. For example, the Combined Drought Indicator (CDI) is used to identify areas affected by agricultural droughts and is computed by combining anomalies of precipitation, soil moisture and satellite-measured plant growth. In other terms, agricultural drought is characterized by a shortage of precipitation which leads to a soil moisture deficit, which in turn results in a reduction of vegetation productivity. 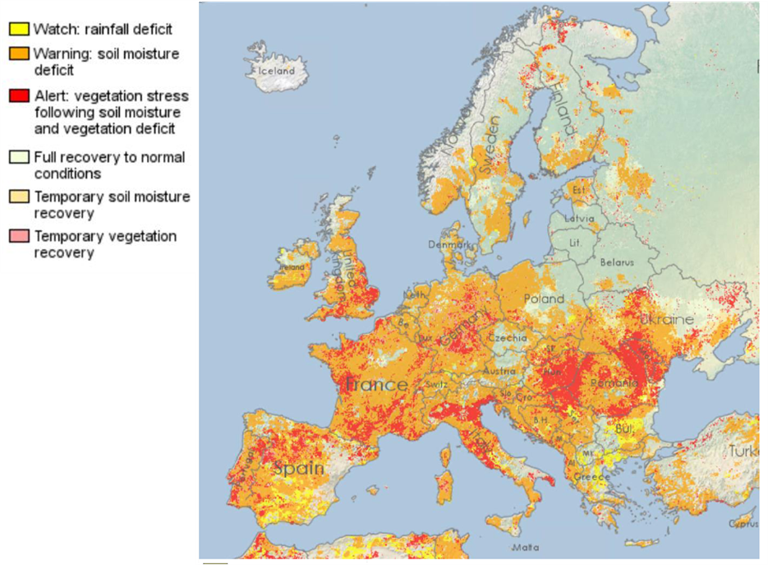 According to the CDI map of the first 10 days of August 2022, 47% of the EU territory was in Warning conditions (soil moisture deficit) and 17% is in Alert conditions (vegetation stress). During the first ten days of September, 26% of the EU territory was in a state of alert and 33% in a state of vigilance. The latest JRC report stated that two-thirds of Europe is under some sort of drought warning, which could be the worst such event in 500 years. According to the Copernicus program outputs, the drought has affected several sectors including transport, energy production and agriculture across European countries.

Portugal reported a significant decrease of water storage for irrigation and less than half the average of the previous five years in terms of water reservoir for hydroelectric energy. Due to drought, 78 deparments in France were affected by a restriction limiting the use of water beyond vigilance, including 40 in crisis state as reported end of October 2022. In Spain, water stored in reservoirs is at around 58% the 10-year mean for the period, and the hydropower generation has fallen by 44% according to the BBC. The maps below represent the storage scenario in river basin districts (August 2021-August 2022). 15.7% of the surface area is in emergency situation, compared to 5.5% the previous year.

Agriculture is directly impacted due to severe drought period enhanced by high temperature triggering higher water demand.  According to the JRC report, the yield forecasts for crops like sunflowers, grain maize are between 12% (sunflowers) and 16% (grain maize) below the 5-year average crops. Prolonged heatwaves were reported since the first half of July 2022 in the Iberian Peninsula, as well as in south-eastern France and western Italy. Short period of very hot days were also recorded at the beginning of August across France, Germany, Switzerland, northern Italy and western Poland. Many European countries have imposed restrictions on water consumption like limits on daily water consumption and prohibitions on car washing.

Drought conditions are favorable for wildfires. According to the European Forest Fire Information System, more than 60,000 hectares of land have burned since the beginning of 2022 in France, already more than double of 2021 and about 4.6 times the average of the last ten years (2012 2021). The total cumulative burnt area in the EU from the start of the year to 3 September is over 750,000 hectares, compared to an average of 260,000 hectares in 2006-2021. 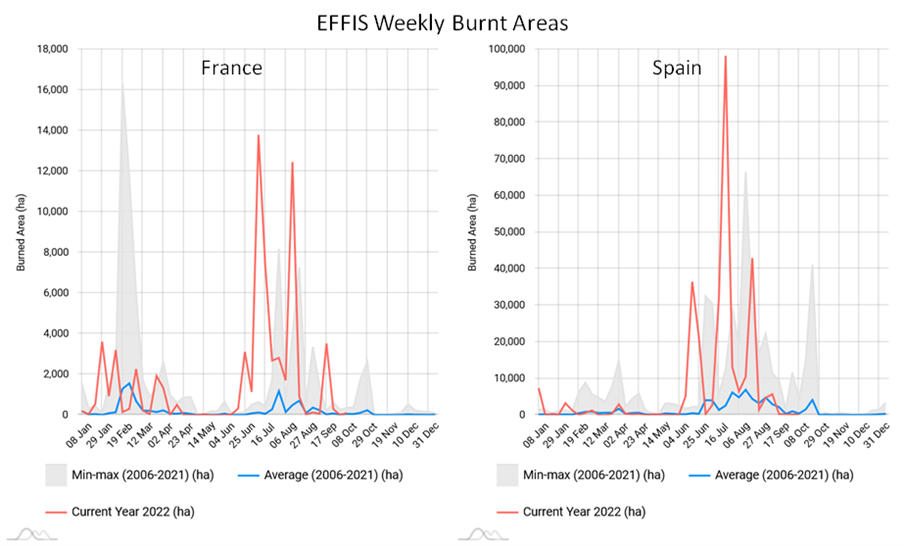 What to do and how to face fast global changes?

In the context of climate change, extreme events could become the new norms which might lead to irreversible damages in the socio-economic and environmental fields, if no urgent actions are taken at the global scale. According to a JRC study, in the absence of action to limit and adapt to climate change, the impact of droughts on Europe’s economy could reach over €65 billion a year by 2100.Experts in the JRC recommended adaptation measures targeting drought-sensitive regions to lessen the unequal burden of drought impacts and the differences in adaptation capacities, such as:

In parallel, it is very important to increase the capacity of monitoring and data collection, and development of early warning and alert systems like the COPERNICUS Emergency Management Service (CEMS). The European Drought Observatory (EDO) will be extended with a drought risk assessment under the ‘EDO for Resilience and Adaptation’ (EDORA) project, which aims to improve drought resilience and adaptation in EU Member States.

Given this context, there is an urgent need to cooperate and apply measures of adaptation to the climate change. Drough and water scarcity related impacts do not know any administrative boundaries, therefore transnational cooperation is essential to mitigate their impacts. Cooperation projects like MONTCLIMA are a leading example in joining forces and implementing concrete actions based on available information and good practices in Europe (https://www.montclima.eu/en/best-practices), and through testing adaptative measures in demonstrative plots to improve the risk management and prevention (https://www.montclima.eu/en/pilot-projects). All the information on past, present and future potential vulnerability of southwest mountain areas is available to all public in the MONTCLIMA cartographic viewer tool (https://www.montclima.eu/en/geoportal).