Throughout the SUDOE territory, the second half of June 2022 is being suffocating.The heatwave, which has been raging for several days, has caused record temperatures of up to 43°C in Spain and southern France, but also in Germany, Italy and the UK.In Biarritz, one of the most popular seaside resorts in the south of France, a record high of 42.9°C was recorded, according to Météo-France.Heat records for June were broken in France on Friday in at least 11 municipalities, including Carcassonne, where it reached 40.4°C: "This is the earliest heatwave recorded in France since 1947," said Matthieu Sorel, climatologist at Météo-France, who insists that this is a " climate change indicator".Situations like these happen when very warm air masses are forced to move from North Africa to southern Europe. Many meteorologists call these extremely warm air masses the African Monster. Generally, this circulation pattern develops when a low pressure system is located east of Portugal and allows southerly flow to consolidate over the Iberian Peninsula. 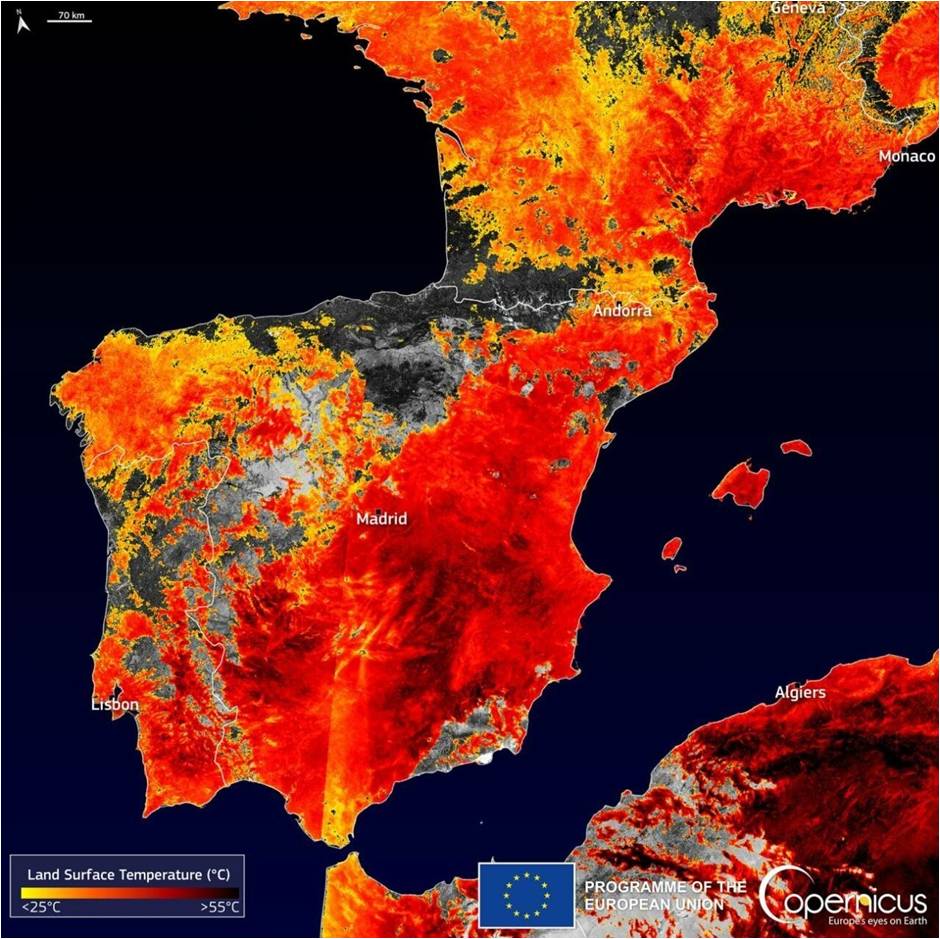 On 17 June 2022, land surface temperatures in parts of Spain exceeded 53 °C, according to the Sentinel-3 Land and Sea Surface Temperature Radiometer (SLSTR) data visualisation map.The ground temperature should not be confused with the air temperature which, although it is also very high these days, does not reach the values that accumulate on the earth's surface. But this may be a more interesting indicator to be aware and raise awareness of the real risks to our ecosystems and therefore to all activities that rely on the soil.

Heatwave and fires: How and why?

This heatwave, in addition to being particularly early, intense and long-lasting, has generated a devastating wave of forest fires. In less than a week, more than 100 fires of varying severity have broken out across the Iberian Peninsula. Thirteen towns in Navarre have been evacuated due to the fires and eight roads of the secondary and principal network have been closed to facilitate the fight against the fires in the region. 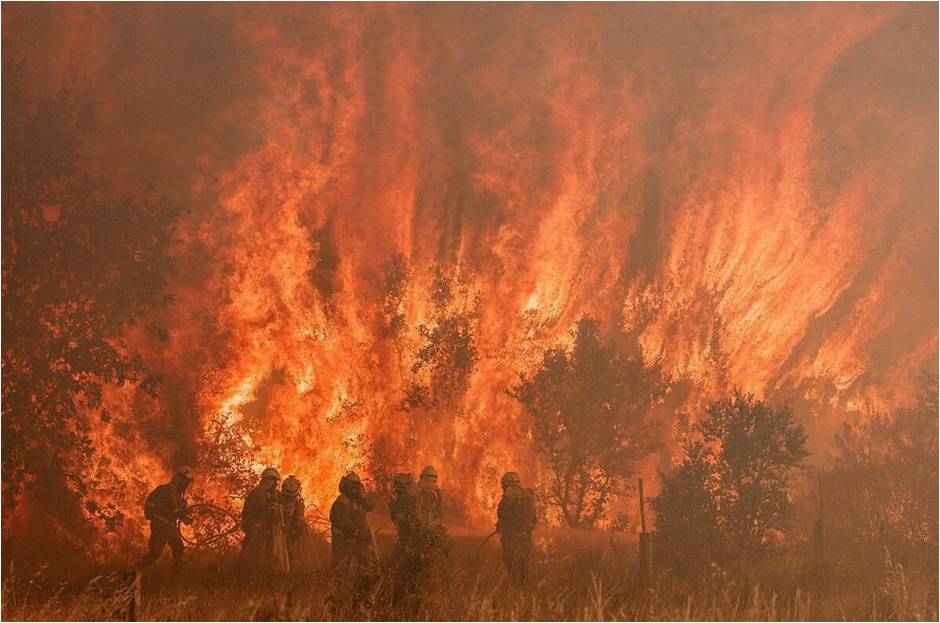 Photograph of the desperate situation in the Sierra Culebra fire.

In Sierra de la Culebra, an environmental enclave that is part of the Meseta Ibérica biosphere reserve, and which has the highest concentration of wolves in the Iberian Peninsula, around 30,000 hectares have been burnt. The fire, which seems to have originated from natural causes (a dry storm), has been intensely fanned by high temperatures, low fuel humidity and winds of up to 70 kilometres per hour.

In Catalonia, where on Saturday there were more than thirty simultaneous fires, strong gusts of wind in the region of Lleida and the simultaneity of fires have been the main elements with which firefighting specialists have fought in Artesa de Segre, active since Wednesday and affecting more than 2,700 hectares. Still studying the causes, since, although the day this fire started there was lightning, agricultural work was also carried out. Catalonia has suffered some 200 forest fires since last Wednesday, an average of 50 a day. In Valencia, work continues to extinguish the forest fire in Caudiel (Castellón), which was brought under control on Sunday.

The uniqueness of this heatwave is due to its intensity and extent and the fact that it occurred during the first weeks of June, with areas recording temperatures some 10 °C above average temperatures for this time of year. The temperature of the extremely warm air mass affecting much of south-western Europe is extraordinary. "This heatwave of historic proportions is doped, and that can only be explained in a climate change scenario," argued

González Alemán, a researcher at the Spanish Meteorological Agency (AEMET) in an interview with the newspaper el País.

There can be little doubt that these phenomena are the result of a new climatic context that we must learn to combat as a matter of urgency. The consequences of global warming - higher temperatures, more frequent heat waves, lower rainfall - together with the abandonment of the rural world and of traditional uses of forests, have resulted in forests that are highly vulnerable, causing more intense, virulent and difficult to extinguish fires. Climate change  does not ignite the forest, although it does mean that the forest is under constant water stress and is therefore highly flammable. An aggravating factor is the large amount of biomass material accumulated by the abandonment of traditional activities in fields and forests, which become fuel for fire. Added to this is the current management of fire fighting, which continues to focus on extinguishing fires rather than on prevention. We have stressed and weakened forests, which were formed in a climate quite different from today's, so they are more prone to burn, and we continue to react only at the time of disaster, where technical and personnel means are limited and have great difficulty in proving effectiveness.

According to experts, the footprint of climate change is becoming increasingly important. In fact, they also agree that the rate of occurrence of heat waves is accelerating in recent years across the Mediterranean basin. Spain has experienced 20 heatwaves since 2015, which equates to a frequency of 2.8 heatwaves per year. The same number of heatwaves was recorded during the period from 1995 to 2015, with a recorded frequency of 1 heatwave per year, demonstrating a very significant acceleration of the process. And predictions for the future do not paint a better picture, quite the contrary. The main climate projections coincide in forecasting the increasingly premature onset of these heat extremes, bringing their arrival earlier into the summer months, as has been the case in  2022. 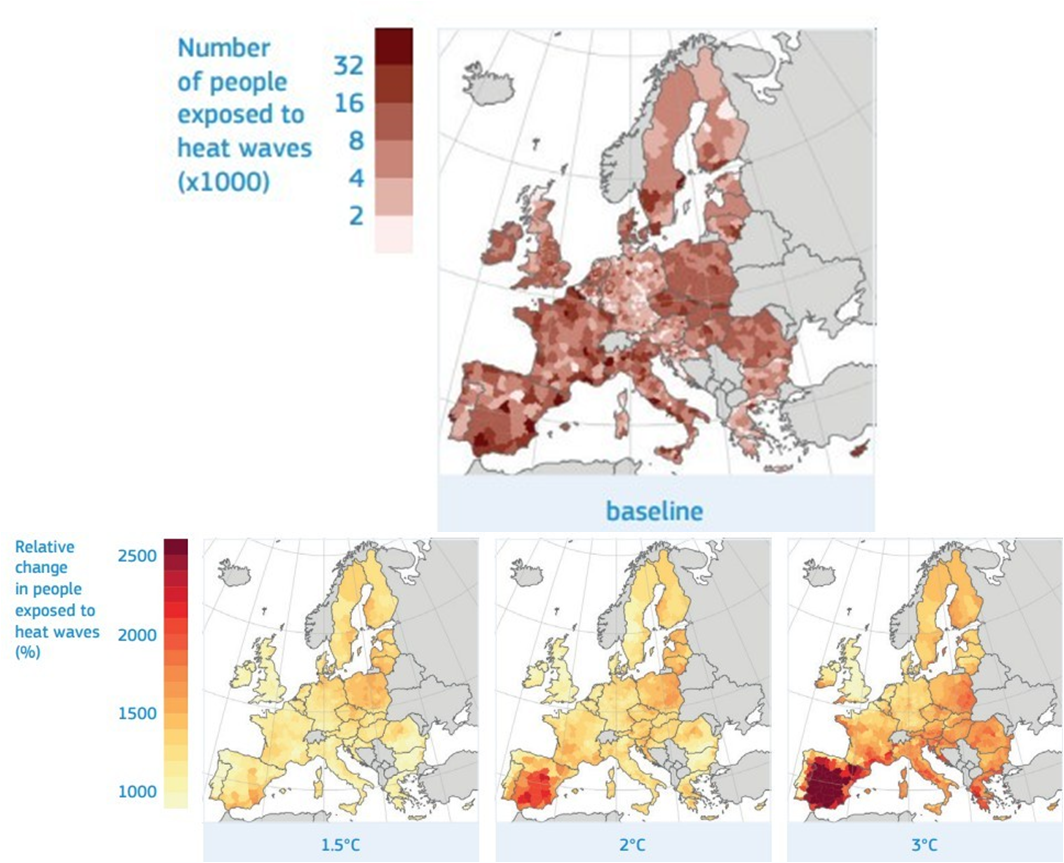 Evolution of the number of people exposed to heatwaves in Europe under different scenarios of rising temperatures.

What we are witnessing, therefore, seems to be a foretaste of the future if greenhouse gas concentrations in the atmosphere continue to rise and push global warming ever higher than pre-industrial levels. We could say that this is a reality check.

Are we ready? Adaptation is the key

Climate change is probably the greatest challenge facing contemporary society. A different climate context implies often unpredictable changes in the behavior of many climatic extremes, which in turn are a source of risks for goods and people. This means that the old formulas, the habits acquired in recent decades, are no longer valid. New care and new formulas must be put into practice to avoid major disasters that have serious consequences for people and the ecosystems that sustain us.

When an extreme event encounters a territory that is highly vulnerable and ill-prepared to anticipate these impacts, a catastrophe occurs that generally entails significant direct and indirect economic costs, often unquantifiable. Will we ever really know the cost of this week's heatwave and fires, and will we ever know the cost of all the immediate and future losses and the cost of all the resources made available when an extreme ?Adaptation is not just a question of building barriers or some green buildings or putting up a park, making a bike path or making a city greener. The real adaptation is to become aware that nothing will ever be the same, that all activities at all times must be analyzed in terms of risks, that the administration must be able to respond and support prevention, in order to avoid the escalation of processes that at a given moment can overwhelm however many means. It requires citizen empowerment and, above all, a socio-economic reflection on the behaviour of citizens, such as trying to make them aware that we can achieve an acceptable standard of living despite the impacts of climate change but this requires, as the European adaptation strategy says, a smarter, systemic and faster approach to really work to avoid new records and new irreparable losses.