3rd MONTCLIMA seminar on management strategies for the prevention of drought impacts on SUDOE mountain forests.

Around 120 people participated in the 3rd MONTCLIMA seminar on management strategies for the prevention of drought impacts on mountain forests in the SUDOE. The seminar, which took place on 30 September in the emblematic building of the "Institut d'Estudis Catalans", was another opportunity to transfer MONTCLIMA's pilot experiences and lessons learned, as well as to share some of the leading practices and initiatives in the management and prevention of drought risks in the forests of the SUDOE region.

The day was structured in a theoretical part in a plenary session with the main presentations, complemented by a field trip to the experimental plots of the MONTCLIMA project in Montnegre-Corredor.

Eva García, coordinator of the OPCC, insisted on the need to share information and experiences in order to improve the management and prevention of natural risks in the Southwest European area, especially in the context of climate change. In this regard, she emphasised the need for a multi-risk approach to cope with natural risk management in mountain areas, stressing cooperation as a key element.

Rosa Amorós i Capdevila, General Secretary of the Working Community of the Pyrenees, emphasised the importance of cooperating in the fight against climate change and natural disasters at a time when the scientific community has once again highlighted the global climate urgency in the 6th IPCC report. In this sense, initiatives such as the EPiCC (Pyrenean Climate Change Strategy), which is being developed in cooperation with the 7 territories of the CTP, are crucial.

Joan Pino, Director of the CREAF, underlined the increasing stress that European forests are suffering due to the greater frequency and intensity of climatic extremes. In this sense, the study and knowledge of the forest’s ecology and their interaction with human activity is fundamental for the proper adaptation of forests to climate and global change.

BLOCK 1: RISK OF DROUGHTS IN THE SUDOE SPACE - HISTORICAL DATA AND FUTURE PROJECTIONS

In this block, Sergio M. Vicente-Serrano from IPE-CSIC indicated that droughts are a recurrent phenomenon that is difficult to predict, even if this extreme event have caused notable impacts   throughout history. In fact, droughts are an extreme meteorological phenomenon with high spatial and temporal     variability also in the SUDOE area.

The IPE-CSIC researcher insisted that the study of trends in this phenomenon is complex, and varies according to the spatial and temporal scale. It is done through the definition    of different indicators. Sergio was frank in acknowledging that the sign of a greater frequency or intensity of this phenomenon is not very clear in the Mediterranean basin, although he did make it clear that the increased water demand by the atmosphere derived from the increase in average temperatures, and this has a direct effect on the levels of evapotranspiration in atmosphere.

According to a recent study on the future projection of droughts throughout the 21st century, carried out with the indicators mentioned so far, in Spain, both under the IPCC RCP4.5 and RCP8.5 emission scenarios, droughts are likely to increase in terms of frequency, duration and severity as a consequence of climate change and linked to the increased need for water in the atmosphere.

This phenomenon has negative effects on forests when water availability is low - mainly in summer - generating water stress (stomatal closure, decay, reduction of carbon fixation...). The researcher concluded that if the scenarios of rising average temperatures will be confirmed in the future, it would place significant stress on forests, especially if accompanied by an  increase in the frequency and intensity of droughts.

"Water demand will increase in the future as the average temperature increases due to global warming".

BLOCK 2: STRATEGIES FOR MANAGING AND PREVENTING DROUGHT IMPACTS IN FORESTS IN THE SUDOE MOUNTAINS

How does drought affect forests in the SUDOE area?

In this block, Jordi Martínez Vilalta, CREAF researcher, stressed that there are more and more cases of forest decline worldwide due to droughts, especially in mountain areas. According to Jordi, all models agree in predicting a higher incidence of this phenomenon in the coming decades. Specifically, this phenomenon manifests itself through changes in the area, density and composition of forest stands, and it is foreseeable that it will do so with greater intensity in the coming decades. However, when and where a catastrophic decline event will occur is more complex to predict due to the existence of compensatory mechanisms (and natural resilience) of forest stands. 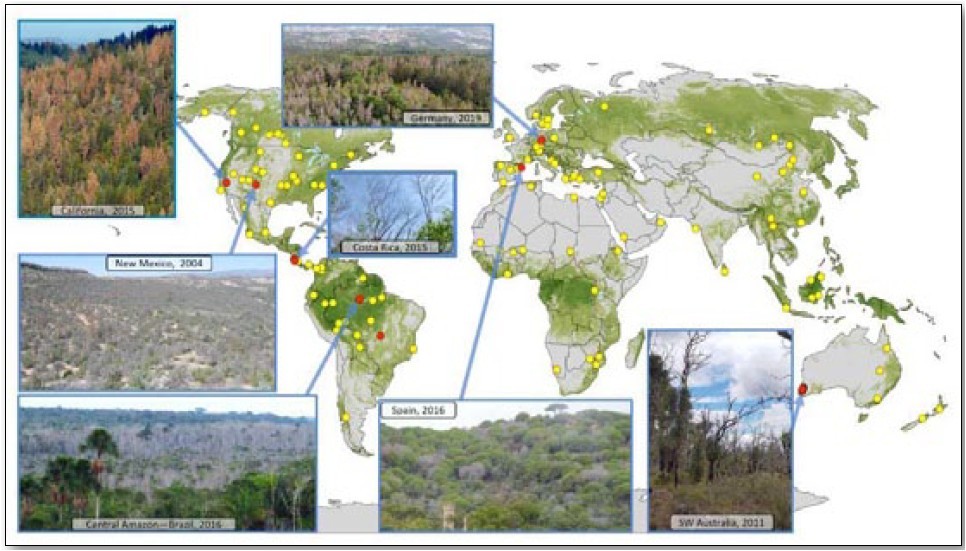 Water availability determines the distribution and functioning of forests. Forest decline associated with drought and high temperatures is a phenomenon that particularly affects mountain areas worldwide.

The CREAF researcher showed that the main historical changes detected in forests are mainly due to changes in land use and other human factors, in combination with climatic factors.

He also stressed that functional diversity increases the resilience of forests to disasters. On the other hand, he also explained that the impact of droughts on forest mortality is a complex process that we are not yet able to model accurately. Nevertheless, it has been estimated that the decline has already affected 3.3% of Catalan forests between 2012 and 2020.

"It is imperative to consider all disturbances that affect forests, and monitoring and tracking programmes are crucial to this end".

How to monitor the impacts of droughts on forests?

For this section, 3 virtuous experiences were selected.

Célia Gouveia, from the University of Lisbon, presented a study based on the analysis of satellite images to analyse surface alterations and degradation of vegetation cover in the Iberian Peninsula (NDVI index). This type of index based on satellite images is, according to the researcher, a powerful tool for quantifying the impact of droughts on vegetation. According to this preliminary study, in this study area, evergreen and larger trees seem to be more resilient to droughts in general. 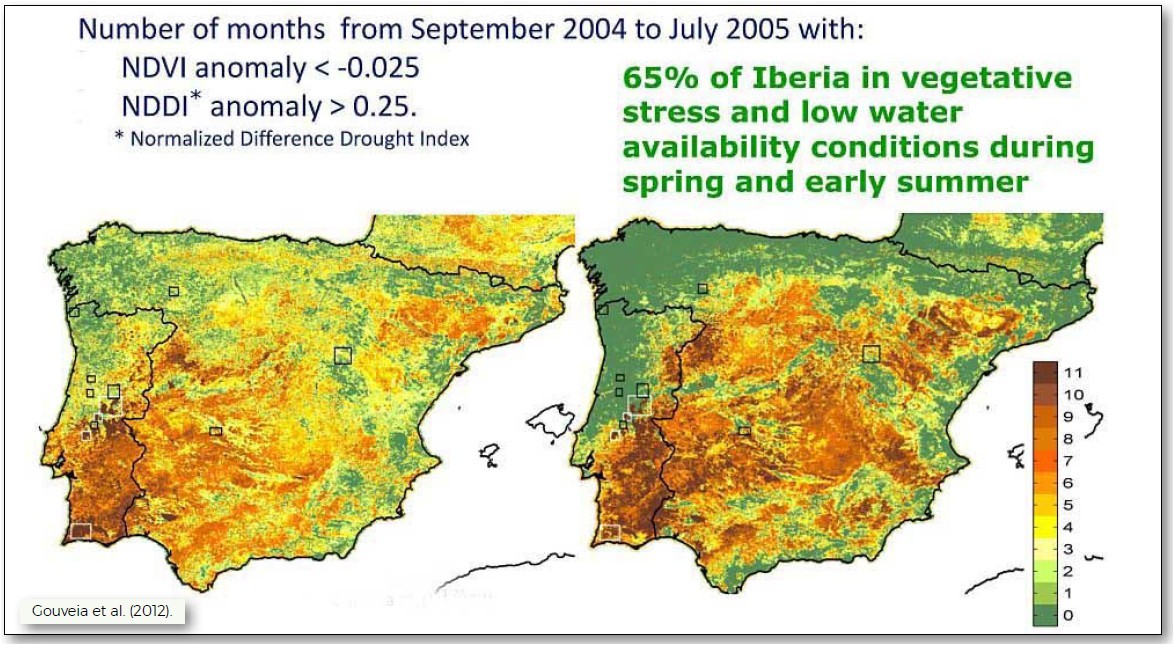 The impact of drought on forests differs according to the level of tree cover. In the case of sparsely covered forests there is clearly a slow recovery impact, clearly affecting productivity (GPP index).

Morgan Goudet from France illustrated the participants with an explanation of a monitoring typology developed in France that allows the monitoring of all the elements related to forest health that are carried out by the French forest health monitoring network (DSF). It is a system of records that allows detailed monitoring of the areas affected by droughts. The huge amount of data stored in a single database on decay, pests, etc., allows all this information to be cross-referenced with meteorological information and future climate projections, thus identifying the areas where forests could be most vulnerable.

From Catalonia, Mireia Banqué, CREAF researcher, illustrated the DEBOSCAT programme dedicated to monitoring forest decline in the territory. This initiative has been running for more than 10 years, thanks to the involvement of the forestry services of the Generalitat de Catalunya.  Its objective is to detect where episodes of decline occur, how often they recur and how forests recover after an episode. The conclusions of this monitoring are crucial to define which areas are priorities and thus accompany the decision-making process in the adaptive forest management of the territory.

How to manage forests and the forest landscape to reduce the impacts of drought at the local level?

In this section, we had the opportunity to learn first-hand about 4 experimental experiences of adaptive forest management in the SUDOE territory, including the MONTCLIMA pilot case of adaptive forest management in a mid-mountain forest in Montnegre-Corredor (Catalonia) and the Andorran pilot case of enhancing the multifunctional role of the Andorran forests.

Alfonso Gonzalez Romero, from the Regional Government of Castile and Leon, spoke about the sustainable forest management actions being carried out in the pine forests of Valladolid. In this study area, the P. Pinaster forest stands seem to be particularly affected by the decline phenomenon. According to the administration's technician, the cause seems to be a combination of climatic factors (droughts), human factors (overexploitation of water resources) and geological factors (sandy soils with low H2O retention capacity). Specifically, they have developed a monitoring device to study the recovery process of pine forests after episodes of decline.

"It is necessary to implement increasingly flexible management methods (stands) to limit the decay phenomenon. " 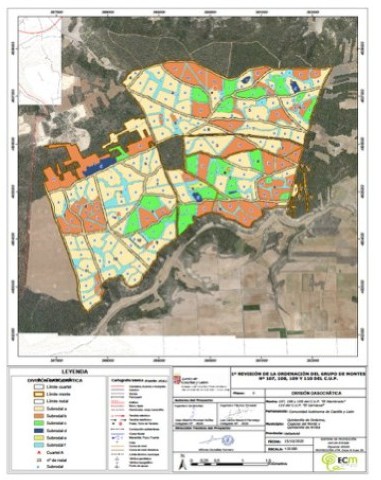 Thierry Sardin, from the ONF, spoke about the strategies and tools for silvicultural management in French public forests. The overall objective of these tools is to ensure the maintenance of the multifunctionality of forests, to increase their resilience to climate change by prioritising the right decisions and measures, thus avoiding "maladaptation". 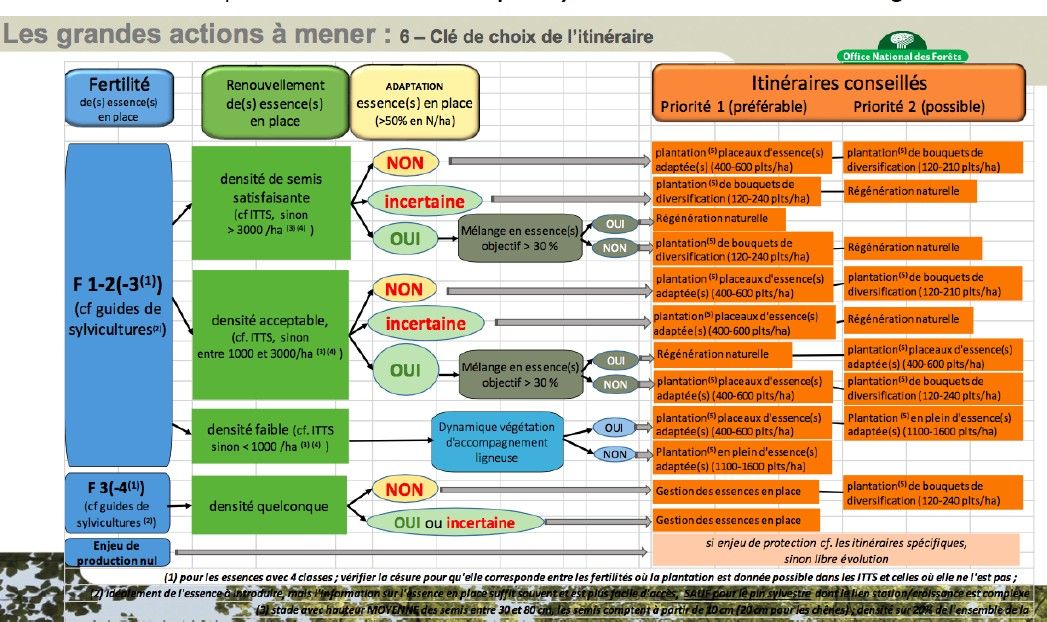 "Species diversity is the key. "

On the other hand, Marc Font from Andorra Recerca + Innovació, presented the experiences of the SUDOE MONTCLIMA project on the impact of future droughts on the resilience of forests in Andorra, and the effects it could have on their protective role against gravitational mountain hazards (mainly falling blocks and landslides).

Modelling tools for increasing drought resilience through the implementation of forest management strategies.

In this last theoretical block of the day, 3 new tools that are being developed in France, Spain and Portugal were presented.

Xavier Bartet, from ONF-RMT presented the CLIMESSENCES tool, developed to project the possible future evolution of different forest species due to climate change. This tool, based mainly on the combination of 3 indicators, is useful for the elaboration of Forest Management Plans. Specifically, the model is based on IPCC scenarios for obtaining future scenarios of distribution of the main forest species (probability of presence/absence). In this way, the model generates 2 types of maps: the so-called climate analogue maps and the climate compatibility maps.

On the other hand, María González Sanchís from the Universitat Politècnica de València (UPV) presented the forest management model developed in the LIFE RESILIENT FORESTS (C.A.F.E.) project. The aim of this model is to develop silvicultural treatments of improvement and regeneration that allow operational improvements in management, thus supporting decision-making in forestry. This model aims to promote sustainable forest management and can include up to 5 objectives weighted according to the user's interest (list of possible solutions).

On the Lusitanian side, João A. Santos, Universidade de Trás-os-Montes e Alto Douro, presented the results of a study on the potential changes in the climatic niches of the main forest species in Portugal (49 species). The model consists of combining the observed bioclimatic indices in order to perform an analysis with climate scenarios. The areas of distribution "liberated" by the expected climatic changes could be colonised by thermophilic species more adapted to the new conditions.

After a round of questions from the audience, the intense but interesting day of presentations gave way to an illustrative visit to the pilot plots in the Montnegre- Corredor Massif. The participants who joined the guided tour had the privilege of learning about this experimental area from CREAF and local managers. 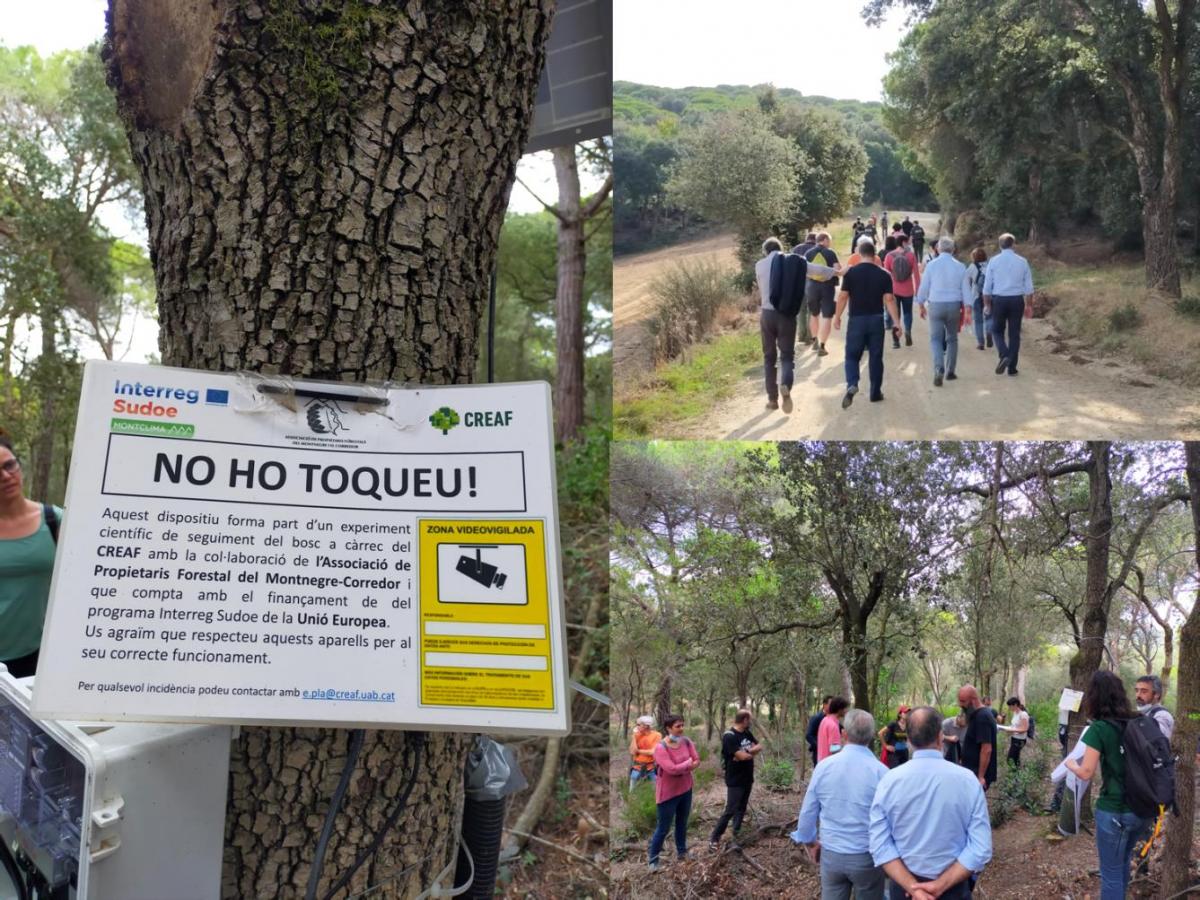 The presentations of the day are available here.

For those who were unable to attend the seminar, you can consult the report of the conclusions of the seminar on our website.

We bid farewell by inviting you to participate in the next MONTCLIMA transfer seminar on erosion risk, which will take place in the Basque Country in June 2022.