More than 100 participants took part in the 2nd MONTCLIMA seminar on forest fires in the SUODE Mountains.

Coinciding with World Earth Day, the second transnational seminar on "Forest fire management and prevention strategies in the SUDOE area" took place on 22 April 2021 in Leira, Portugal. The meeting was hosted by the Intermunicipal Community of the Leira Region (CIMRL), a partner of the project. From 9:30 to 14:00, numerous external speakers and MONTCLIMA partners shared the latest data collected on forest fires, and exchanged on best management practices to increase the resilience of the territories of the Southwest against the risk of forest fires. 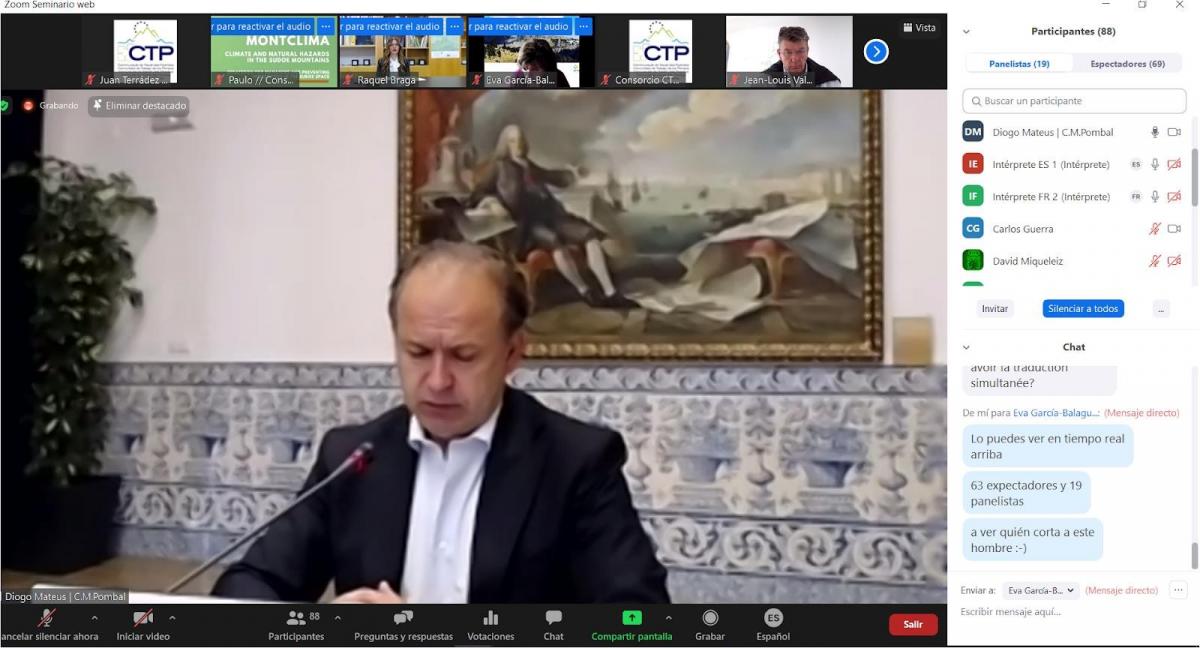 To welcome the participants, Eva García-Balaguer, coordinator of the Pyrenean Observatory of Climate Change underlined that the MONTCLIMA project is based on the capitalisation of experiences and good virtuous practices on coordination, management and prevention of natural risks in the mountains of the SUDOE area. The OPCC Coordinator underlined that MONTCLIMA is based on 4 pilot cases and on the transfer of knowledge and experiences as a basis for improving the resilience of the SUDOE territory.

During the institutional opening, Diogo Mateus (in name of the Secretary of State for Nature Conservation, Forests and Spatial Planning of Portugal) highlighted the importance of cooperation and municipal plans in adaptive forest management to improve the resilience of mountain territories against forest fires. To this end, Mateus underlined the importance of involving all territorial stakeholders and the population: “This is the only way to achieve the necessary balance between socio-economic development and environmental protection”.

Marc Castellnou (Forest Action Support Group - GRAF, Member of the fire brigade of the Catalan Government) stressed the new paradigm we are facing with the sixth generation fires. Our forests are under stress and therefore more susceptible to more intense fires. This is mainly due to the climate and land management crisis that the Mediterranean basin is experiencing. 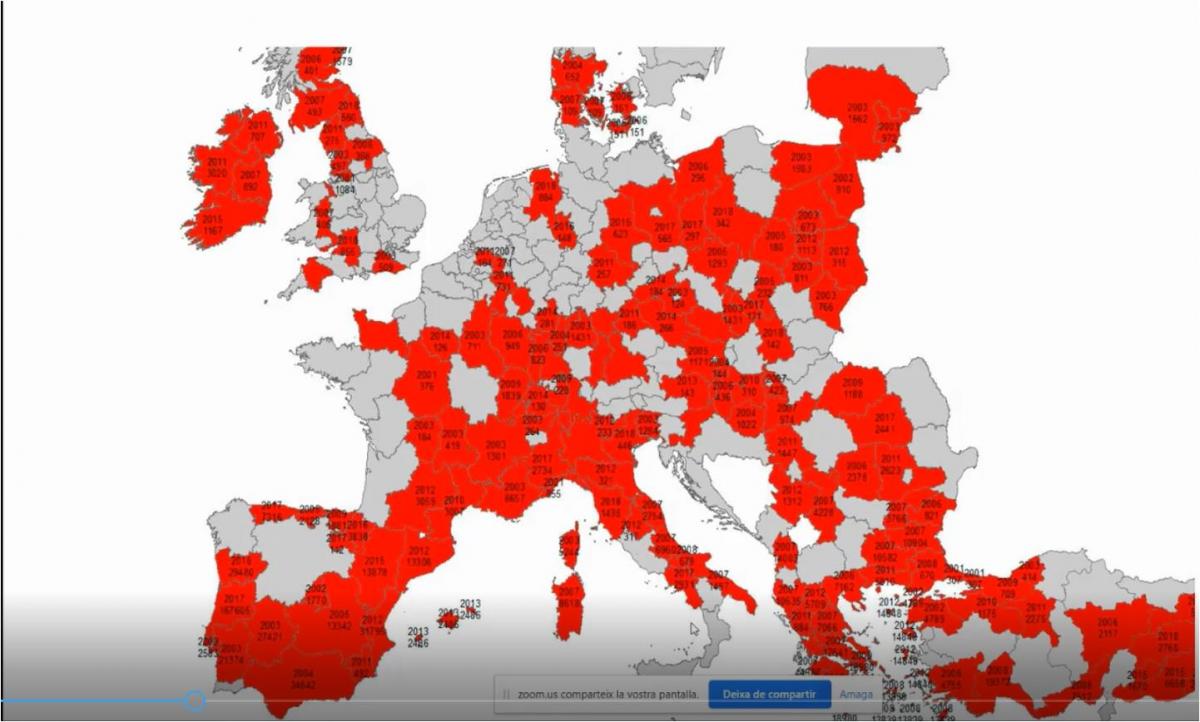 In red are the areas where the pattern of fires has changed in recent decades towards more uncontrollable situations.

This situation could extend to the rest of south-western Europe, as summers are getting hotter and hotter, after very rainy winters in which a lot of biomass is generated and not properly managed. According to Marc, the transition towards adaptive land management and in general towards a circular economy is the key. In this sense, according to Catellnou, landscape mosaic heterogeneity is part of the solution to the problem.

Remi Savazzi (French agency for the defence of forests against fire - ONF, DFCI) focused on the northern slopes of the Pyrenees, where the fire season is mainly concentrated in two peaks: one in summer and the other at the beginning of the winter season. 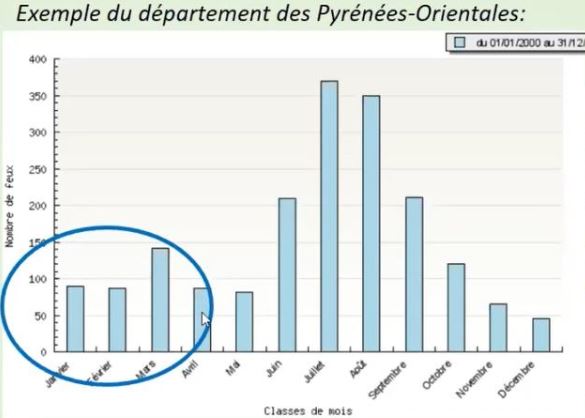 Statistics on peak fires in the department of Pyrénées-Orientales.

Remi stressed the importance of knowing exactly which are the periods of highest incidence, and which are the areas at risk. These are fundamental elements that allow us to focus our efforts on prevention.

In this sense, Savazzi illustrated to the participants some of the index that are developing for a better monitoring of winter fires (Hatching - Propagation). He also underlined the existence of an inversely proportional correlation between the number of fires in this mountain range with the levels of winter snowfall. 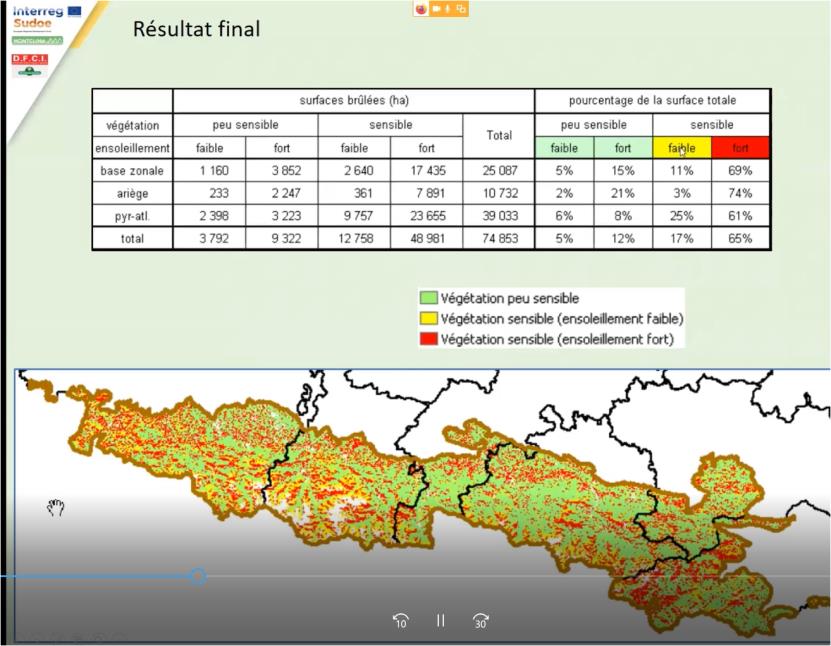 Preliminary results on areas particularly sensitive to fire risk on the northern slopes of the Pyrenees.

On the other hand, Carlos Guerra (CDOS - District Command for Relief Operations in Leiria) presented a video on the innovative surveillance mechanism that has been articulated in Leiria after the fires of 2017. The innovative system allows instantaneous detection of ignitions and access to real images of the fire with several panoramic views: key elements to articulate more effectively the combat plans. The system, equipped with 9 stations and reinforced with 2 watchtowers, is equipped with its own radio frequency communication system, directly connected to the Republican Guard and Civil Protection centre, making it an ideal complement to the traditional surveillance system. 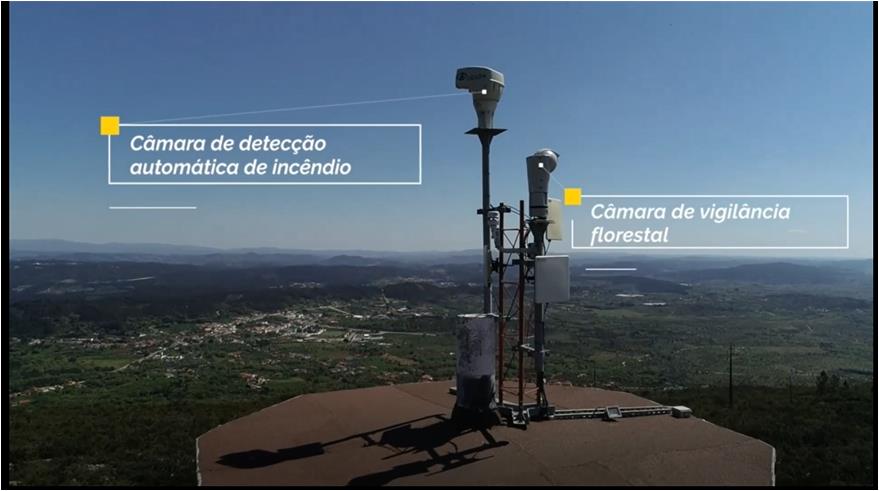 In conclusion, Mr Guerra insisted that fine-tuning preparedness and prevention is the best way to respond to the risk of fire, as it allows for rapid intervention, in the early stages of ignitions.

Noemí Palero (Forest Ownership Centre of Catalonia) presented how to manage forest to reduce fire risk at a local scale, using the example of Catalonia. He underlined how the new planning at massif level carried out in Catalonia is leading to new and more effective prevention infrastructures, which improve the identification of strategic points for early response to fires.

For the last 6 years they have been working on implementing multifunctional (productive-preventive) models that combine forestry exploitation with fire prevention. This type of numerical and dynamic model makes it possible to integrate production and prevention simultaneously. Efforts are being made to extrapolate this model to other production activities, integrating the option of prioritising the preventive or productive objective depending of the scope. 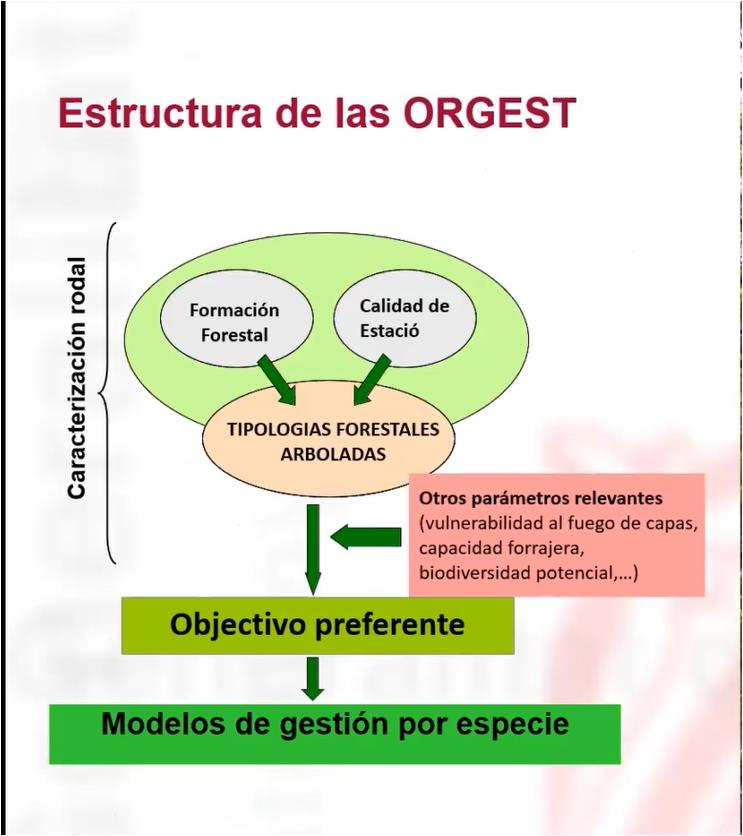 Structure of the ORGEST model.

Diana Pascual (CREAF), briefly illustrated one of the 5 pilot cases being implemented in the MONTCLIMA project. This pilot area, located in the Montnegre-Corredor Massif (15,000 ha) consists of the application of adaptive forest management measures in this key area, which will reduce the risk of fire in the massif as a whole. The actions aim to restore the agro-pastoral mosaic in order to increase the resilience of the pilot areas against forest fires and climatic extremes. A monitoring network has been set up to monitor the evolution of the forest mass after the pilot actions (8 observation plots, with sensors for physical variables). 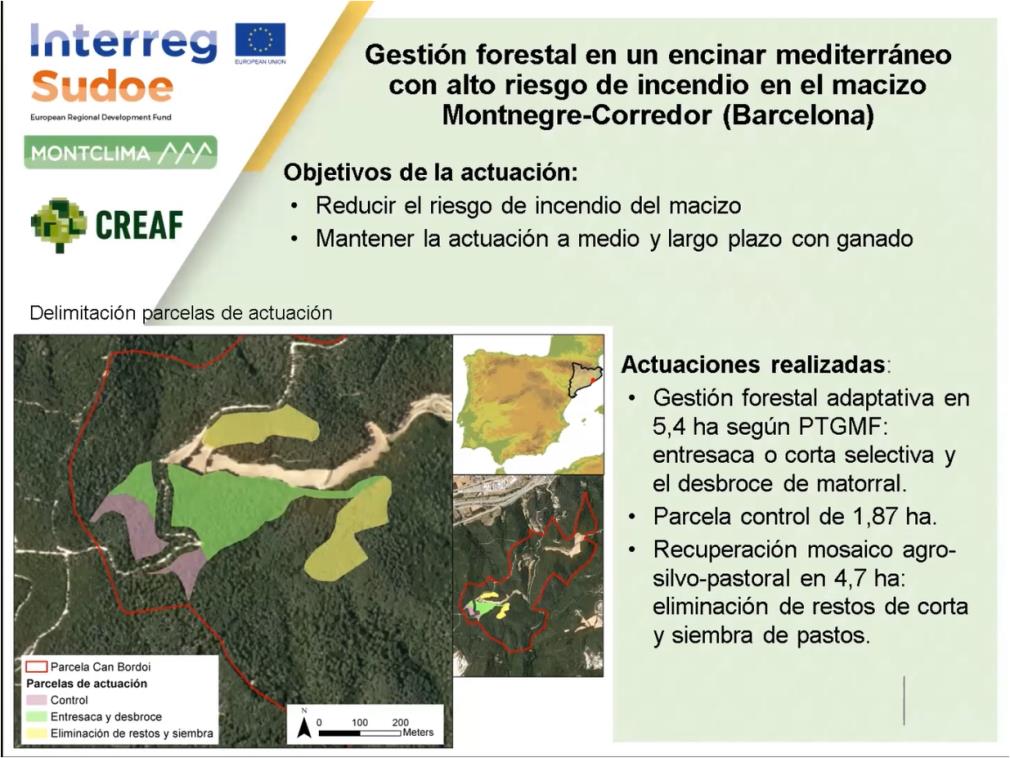 Summary of the actions carried out in the MONTCLIMA pilot case on the application of agrosilvopastoral measures for forest fire prevention.

From the data obtained so far it can be concluded that fuel moisture is inversely proportional to the combustibility of the biomass, and this moisture increases considerably with the adaptation measures applied in the management of the pilot area.

Antonio López Santalla (MITECO) presented the Arbaria project, whose objective is the study of socio-economic variables to include the human factor as a key element in the prevention of forest fires.

Is it possible to identify socio-economic factors that can predict the occurrence of fires? The Arbaria project has found some clues.

There are some elements in the social domain that show correlations in this sense. For this type of study, it is crucial to have a long series of data on fires that have occurred in the past. According to this study, 40% of ignitions show clear socio-economic patterns (gender, age, income, unemployment, enterprises or the useful agricultural area) although there are differences according to territories.

Thanks to this statistical information, it has been possible to increase knowledge and demonstrate the causal relationship between forest fires and socio-economic factors: "Only if we take them into account it will be possible to proper anticipate in the field of prevention, on the management of the territory and the people who live there".

David Miqueleiz (Head of the environmental research group, Government of Navarra) spoke about the importance of the human factor as the main cause of forest fires and the case of the transnational fire that occurred between Navarra and Nouvelle Aquitaine during the winter season of 2021. The coordination of the investigation to clarify the causes is being carried out between the 3 police forces, through a cross- border group that is responsible for coordinating these three bodies.

According to Miqueleiz, the investigation of the causes of fires is the key to issuing effective corrective measures. The motivations of the fires are also fundamental to establish patterns that help to establish the relevant preventive measures. 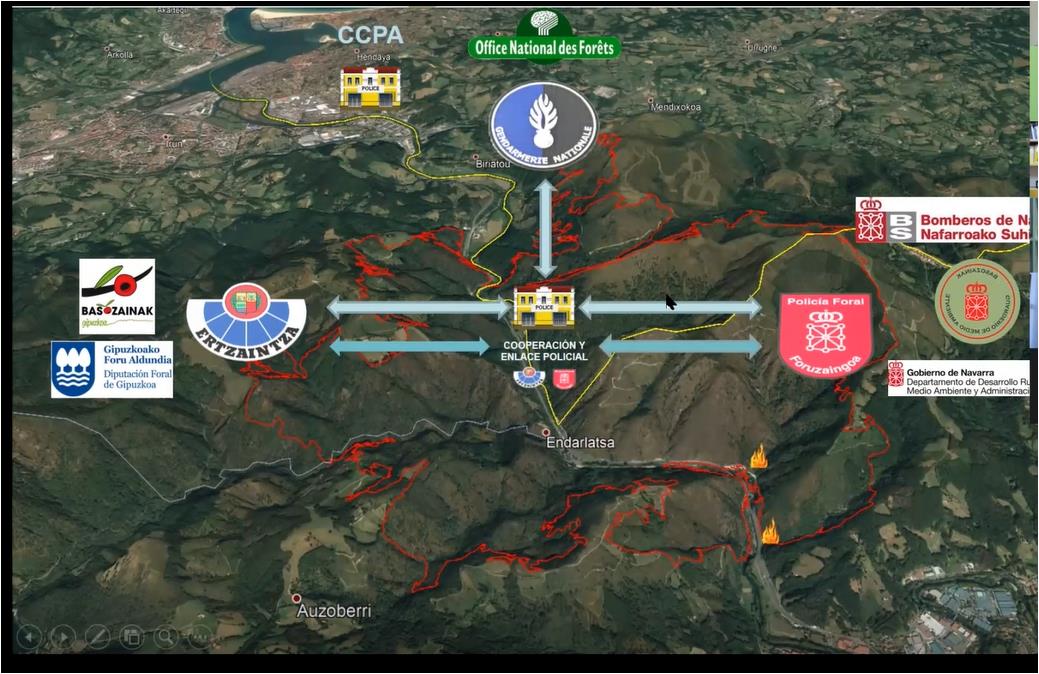 Police and customs control centre (CCPA) that coordinates the actions of the competent authorities of Navarre, the Basque Country and France.

To conclude, a round table discussion took place in which participants presented some key ideas.

David Miqueleiz stressed the importance of maintaining the mosaic landscape, but that this should be done in a controlled and legal way.

Carlos Guerra emphasised the responsibility of the scientific community and managers prevention to transmit knowledge about prevention in a clear and concise manner. It is also important to update knowledge of old agricultural practices that are being negligently replicated.

Michel Castan insisted on the risk of applying grassland management practices such as controlled burning at this time, as the abandonment of this type of practice leads to fewer staff and therefore more risk of fires getting out of control.

Naomi Palero insisted that landscape planning is the key to prioritising actions. In this sense, it is crucial to bring together the forestry and agricultural sectors in this exercise, in order to generate resilient mosaic landscapes that help prevent fires.

Finally, Remi Savazzi stressed the need to adapt the current means of prevention to the new changing situation, both in relation to climatic changes and to social and economic changes.

The various presentations at the conference highlighted the need to tackle fire risk from a multidisciplinary perspective. It is undeniable that society, the economy and the environment are closely linked. Therefore, tackling the management and prevention of forest fires requires a new creative approach that integrates the emerging challenges: climate change, environmental protection, socio-economic aspects and, in general, land management.